Budweiser: King of Beers and Can Design Engineering

Developing a cutting edge product and manufacturing it with extra factory capacity is certainly a win- win scenario, and one which Anheuser-Busch used to produce their new “bowtie” beer can.

If you’re like me, the first thing you thought when you saw this new design was, how did they manufacture it?

If you’re still scratching your head you’re not alone; it took Anheuser-Busch three years and $20 million to develop the equipment and process.

In the final step, the top is trimmed and pressed inward in a process call “necking”; this forms a taper where the lid will later be attached after filling. There are beverage can systems that manufacture cans in this manner in speeds up to 2400 cans per minute.The traditional can is manufactured through a process of cold forming; in this process, a flat blank is formed into a cup,  the cup is then formed using a process called ironing. The dies used in the ironing phase also form the bottom of the can.

It goes without saying that this is a very evolved process, which makes one wonder how different the new process must be to require such a high development cost. In fact the new can costs more to manufacture: it requires twice the aluminum and contains 6% less beer than the traditional can.

With aluminum at over $0.80 per lb., one wonders if the investment will pay off. 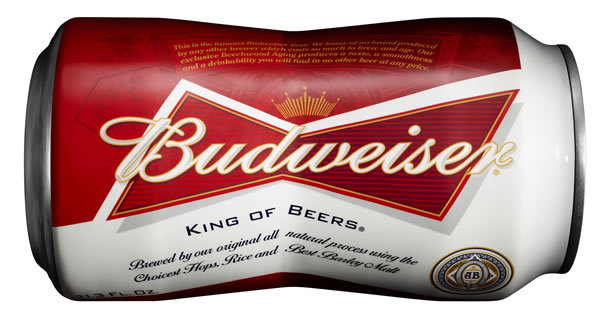 Though not much is yet known about the manufacturing process, it is safe to say that it begins with a standard can, with heavier walls. This would explain the extra material, which would have been necessary to produce the shape, as standard cans have wall thickness is only 0.0047”.

Due to the physical properties of aluminum, the custom shape and thickness of the material, and the production volume that a product such as this requires, the dies and the system in general would require extreme precision.

Anyone who understands the complexity of high speed automation and precision dies can appreciate the amount of engineering that a system such as this requires.

The can is currently being manufactured at a 300,000-square-foot New Windsor, New York plant, which had to undergo significant changes to accommodate the manufacturing line.

The 150 employee facility has already produced over 18 million bowtie cans, which is just a fraction of the over 3 billion cans that they manufacture annually.

Whether you’re interested in learning more about metal stamping (you can read about it on our resources library page here) or would like to discusss an upcoming project with one of our engineers, Manor Tool can help. Click the link below if you’d like to schedule a consultation.